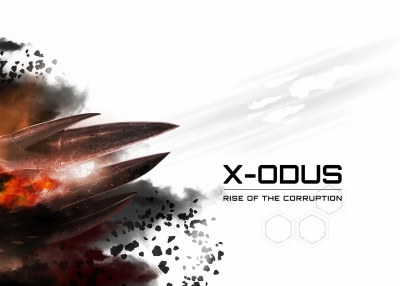 X-Odus - Rise of the Corruption English

X-ODUS: Rise of the Corruption is a collaborative adventure and tactical game for 1 to 4 players, with a rogue-like mechanic and rpg elements, in a sci-fi setting.

Set in the distant future, players take command of powerful spaceships, and explore the Galaxy to try and prevent an ancient entity known as the Corruption to rise and destroy all life.

The modular board of hexagonal tiles, revealed as the game progresses, along with the random enemies, allies, explorations and events, creates an always renewed experience.
On top of that, each spaceship has a different role, and as you play and evolve, you get to choose new abilities with each level. Many of these synergize with each other and with other ships as well, creating a vast number of possible team combinations and ways to approach each situation.

The game is also highly cooperative,and generates a lot of player interaction around the table when strategizing, planning your next moves or simply fighting together against powerful enemies.

Finally, with immersive art, design and texts, each new game tells the story of a band of adventurers saving the Galaxy, and the hardships they face along the way.