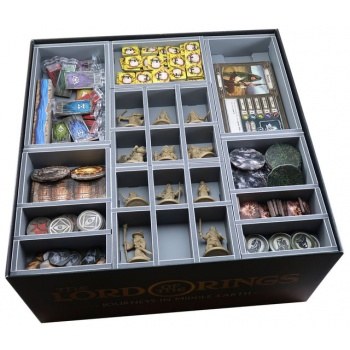 Insert compatible with Journeys in Middle-Earth®, and the Shadowed Paths®, Villains of Eriador®, and Dwellers in Darkness® Expansions. The design provides both efficient storage and improved game play. Many of the trays can be utilised during the game, and they greatly aid set-up and clear-away times.
The insert is arranged in three layers, and uses the large square battle map tiles to separate each level. In each of the two lower layers there is a stack of journey map tiles. The largest and smallest tiles go on the bottom layer (shown here on the right) and the medium sized tiles go on the middle layer (as shown on the left). This is easy enough to do as they larger tiles all have a width of four or more hexes, and the medium ones a width of three or less. For the avoidance of doubt there is a list further down the page with the numbers of each tile indicating which goes where. The hero card tray has space for the cards to be sleeved with quality sleeves. The two trays for the game cards have slots sized to match the quantity of each of the 12 types of card, including splitting the item cards into carried items, armour, and trinkets. Again there is space for all cards to be sleeved with quality sleeves. the three layers of trays are separated from each other by the two large square battle map tiles. This helps keep everything in place, including the two stacks of journey map tiles. When packing the box first place the rule books on top of the trays. Lastly place the two largest journey map tiles (numbered 401 and 402) on top of the rules. Once fully loaded the box is filled to the top, allowing for vertical storage. This product consists of a flat-pack of 9 Evacore sheets. The trays require assembly, which is quick and fun, using ordinary PVA glue. Detailed instructions are included in the package.