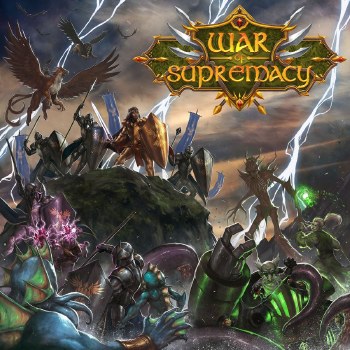 The world of Mahlor; filled with mythical races, breathtaking lands, amazing creatures and mesmerizing magic is being torn apart. The Gods, who were once, long ago working in unity to bring the world together, are now competing and fighting with each other for world control. You, as one of the newer Gods must strategically use your acquired creatures and spells to win the Territories all Gods are desperately fighting for. Take what is yours, take what you deserve. Complete and utter supremacy.

War of Supremacy is a free-for-all, king-of-the-hill style, fantasy card game in which all players are fighting over a centralized Territory: a battleground in which all players want to take control of and ultimately win in order to claim it as their own. If a player gains control over a number of territories they will control enough of the world to win the game. With all players fighting for themselves, the battlefield becomes an all-in brawl with only one winner.

Players take turns, using creatures from their hand to attack the opponent’s creatures currently defending the Territory. If a player manages to defeat the defending creatures, they take control of the Territory, placing all their creatures used in the attack into defense. That player will then become the defender in which all other players are trying to defeat.

If a player manages to defend against all opponents, then they win the Territory and take it as a victory point. Players can also win a Territory by building up enough score in their attack or defense to win the Territory outright before others get a chance. Players can combine creatures with spell cards that offer a wide range of game changing effects.

Master your tactics, form alliances and make enemies, and have a little bit of luck to win.