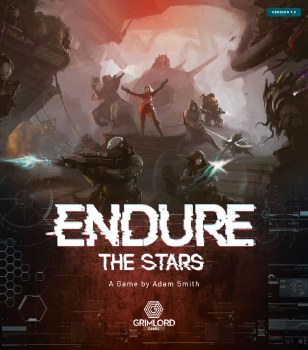 Endure the Stars 1.5 is a 1-6 player fully cooperative action survival game set on the planet-colonising ship, the N.W.E. Hikari. Players pick up the story one year into the Hikari's colonisation efforts and everything has fallen to ruin. Scientists aboard the ship were attempting to genetically engineer life forms to explore the planet below, unbeknownst to the ships general populace. But a series of tragedies lead to the truth being discovered and the ensuing chaos released the creatures from containment, where they rampaged through the ship, killing anyone they came across. Now the remaining crew live in small groups, salvaging whatever they can to survive.

Game overview
Complete various missions as a standalone game or an overarching campaign. With 33 unique missions in the core rulebook, and with the Refuge system, any missions can be chained together to form campaigns that last as long as you like.
Endure the Stars 1.5 is a revamped version of the original game, with lots of new and exciting content and mechanics!
Ammo cards have been added to the game, allowing players to modify the behaviour of their weapons on the fly!
Searching mechanics have been refined and split into 2 card decks, the Item and Weapon deck, giving players much more control over what they can search for.
New Events throw even more danger into the mix! Old favourites like artificial gravity failures and blackouts return, long with new events such as raging fires, gas leaks and more.
Enemies have been overhauled and now have their own unique abilities. Boss AI has been upgraded and refined to create even more dynamic and exciting showdowns.
1.5 features a graphical overhaul too! All game tiles have been redone by Henning Ludvigsen, door standees have been added and all Survivor and Boss dashboard now feature wheels to keep track of damage and Resolve, removing the need for fiddly tokens.