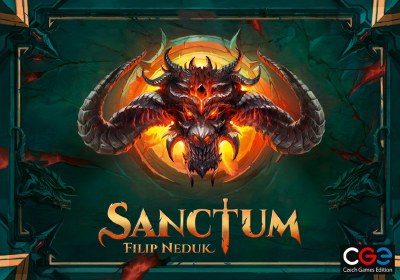 Sanctum is a competitive strategy game inspired by hack-and-slash RPG video games. Each player controls one of four unique characters as they journey into the heart of the fallen city of Sanctum, building up their skills and arsenals along the way to prepare for the final fight against the Demon Lord.

Multiple players may survive the fight, but only one may claim the glory of purifying Sanctum.

Gameplay is brisk, with the possibility for overlapping turns. The four characters all have unique skill sets, and you’ll level up fast, giving you frequent opportunities to choose new skills. Every decision counts.

Though the game is competitive, the goal is to destroy the Demon Lord, not each other. So player interaction is a race rather than a fight: Who’s furthest along the board? Who will get to choose first when an equipment draft gets triggered? Who will gain the benefit of reaching the Demon Lord first? Who will get to that group of blue demons everyone wants? Who will unlock that achievement and claim the bonus?

On your turn, you choose one action:

1) Move: Advance along the path toward the Demon Lord, and engage some demon minions to fight later.
2) Fight: Fight all the demon minions you’ve engaged. If you kill any demons, upgrade Skills and acquire Items.
3) Rest: Equip some of the loot you’ve won, recharge the resources you use to fight, and buy potions with extra Items you don't need.

The choices you’ll be balancing and weighing against each other as you go include:

- What demons should you fight? Demons come in three colors: Blue, red, and green. The color of the demon determines which of your character’s Skills you’ll be able to choose to upgrade if you win the fight. Plus, each Demon drops a specific piece of gear when you beat it. What kind of gear do you need — a chest plate? Footgear? A weapon? Finally, since killing demons requires you to roll dice to match the die face showing on the demon’s card, which demons can you kill based on your current gear and skill setup?

- Which Skills should you unlock? Each character has 9 skills. Which ones you choose to gain in a given game drastically changes how the character functions.

- What gear should you equip? Some gear helps you block damage. Some helps you modify dice rolls. The better the gear, the harder it is to equip.

- When should you Move, Fight, and Rest? You’ll want to Move and Fight as many times as possible between Rests, but wait too long to Rest and you may take more damage than you can afford. Rest too often, though, and you’ll fall behind the other players and miss out on some kills.

- Should you do what is most optimal for your character at any given moment, or should you sometimes put that aside in order to claim competitive achievements before other players can?

The final battle with the Demon Lord is tough. Even surviving can feel rewarding. But only the player with the most health at the end of the boss fight can truly claim the glory of his defeat!